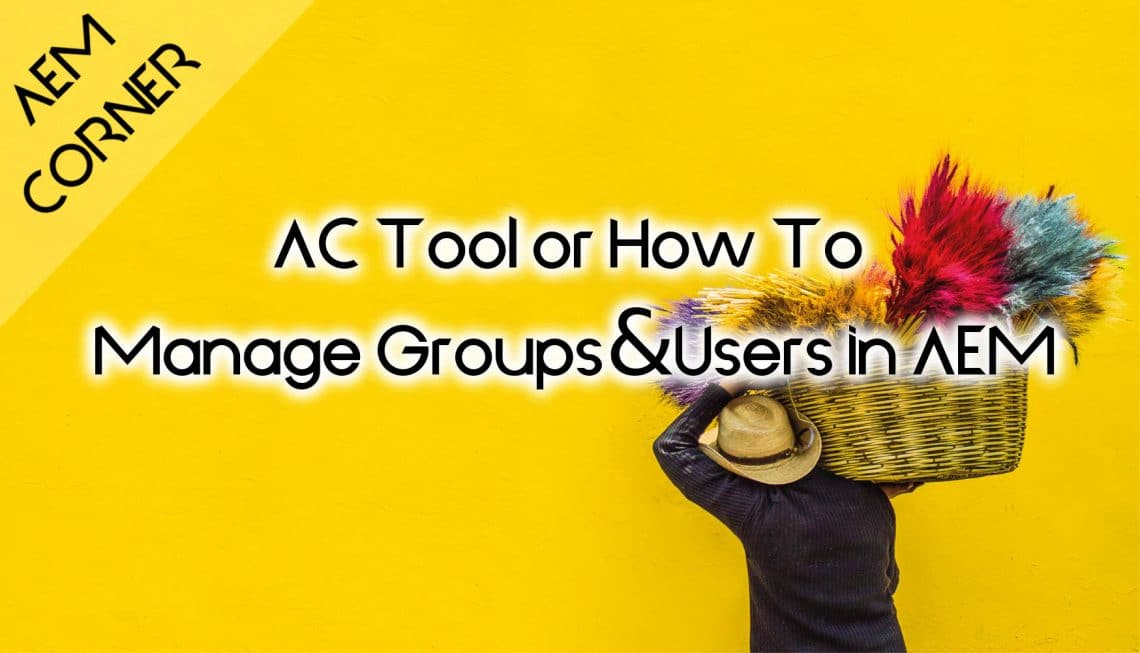 Before I learned about AC Tool, I worked with a couple of projects several years ago – they were quite big and had many markets and locales. And, as you can imagine, these projects had quite a sophisticated hierarchical structure of users and groups. Time to time, we were rolling out content for new markets/locales, what required the creation of a bunch of groups and setting of correct permissions to them. This routine required one developer to be fully focused on this job for several hours until everything was created, assigned and activated. Then, we had to synchronize made changes among all environments, and later, sometimes, fix issues which we made because of human mistake. If only we had Access Control Tool that days.

Access Control Tool (or simply AC Tool) developed by Netcentric allows us to specify complex Access Control Lists in separate files in yaml format. With it, we are able to create and configure groups and users. Furthermore, it can export all existing AC entries in the system, so migration to AC Tool is really easy!

Why do you need AC Tool

AC Tool provides a great set of features which we can and should use. It allows not only persisting of ACLs inside the project but also it represents these ACLs in human readable yaml format. Having ACLs defined in the sources allows testing it as we test any other thing in the project according to a development/release circle. Some small set of what we can do with this tool:

A good comparison with alternatives can be found here. How may look the project setup with AC Tool

First of all – we need to install the package with the tool into AEM instance. We can grab the package from maven repository https://repo1.maven.org/maven2/biz/netcentric/… Unfortunately, there is no good wat so far to embed it into our configuration (or other) package and have is installed automatically.

Now we need to select a way we want to apply our yaml configuration files to AEM instance: most probably you use content-package-maven-plugin in your project and it would be a good idea to go with. Put your yaml files into the package module and configure the plugin:

For other ways of configurations installing check this page.

Now we need to setup configuration which represents our current state in AEM. You have tens/hundreds of groups and you think it will take days to do this? NOPE! You just need to use export feature of AC Tool and get yaml files generated for you.

Trigger export based on groups clicking on groupBasedDump(). You will get a dump of all groups and related to them ACEs. Now you can copy rules to the package. Make sure to clean up configuration – most probably, you don’t want to manage most of OOTB groups (e.g.: “administrators”) with AC Tool. More info on this topic is available on GitHub.

Organizing configuration in the project

Storing groups definitions and their ACEs together in one file does not much help to increase maintainability of our AEM system. So we need to split them into files and folders. One of the approaches I will describe below.

We define two fragments – one denies access to all the content and features within AEM and another gives permissions to the resources which allow basic usage of the platform (e.g. /var, /libs). Later, each role will be a member of both these fragment groups.

For the demo purposes, we will only restrict access to /content section and to Projects Console. In a real project, you will want to have a complete ACEs list for all the futures in AEM.

Configuration attributes are more or less self-explaining but to get a good overview of available attributes and their possible values you can refer to the official documentation. Also, note that folder contains “.author” at the end, what tells the tool to apply this configuration only on author AEM instance. As long, as we do not deny access to the basic functionality we have nothing in ace_config section for fragment-allow-basic.

Now we want to define functional fragments which allow accessing features we denied above. In our case, we need to define only one – for the Projects Console.

We also want to define fragments for accessing content (as we may have several projects and/or markets/languages in one AEM installation and different roles should have access to different parts of the content. In this example, we will use default We Retail site as a target.

Finally, we define user roles for our project.

In the configuration above we defined 2 roles – one for viewing projects and another for viewing We.Retail’s content. It’s probably not the best real-world example but it’s a good demonstration of the approach.

As stated before, for the sake of simplicity we do not restrict access to everything and do not provide separate fragments to allow features like Sites console. So we will use predefined group contributor which already have all the basic permissions we need.

Ok, now we want to deploy and test these configurations. To do this we will need some test users. Why not create them with this tool as well?

One test user for each role. Passwords are not encrypted but it’s fine for our test system – as you can see folder name contains runmodes local and dev so it will not be applied to rest environments (e.g. production). Here we also provide the content of the preferences node – we don’t want to get “Getting Started” popups in AEM. It’s time to deploy and check the results!

Under /var/statistics/achistory we can check logs and status of previous installations. This is the first place to check if you package installation fails because of the AC Tool. In our case, status is “success”. The user sees only We.Retail site (admin also would see campaigns and screens folders there). There is no Projects icon in Navigation. If the user will try to Projects Console directly by the link (/projects.html) – he will get 404 error.

Sometimes it’s quite useful to create a real user which will get even to production – one of such cases is Replication Receiver for the publish AEM instance. To be safe enough we should have password encrypted in our configuration file. This can be done with AC Tool:

Crypto Support Console (/system/console/crypto) can be used to get the encrypted password. But you have to make sure that you share the same crypto key among all instances this configuration should be applied to.

Some things can be configured globally. E.g. we can configure minimal required version and in case version of installed AC Tool is less than specified – configurations will not be applied.

You can find complete documentation on GitHub.

All configurations from this article are in this repository.

Featured Image is by Ronald Cuyan

One thought on “AEM: AC Tool or How To Manage Groups & Users”

Your thoughts are welcome Cancel reply